For the love of horns...

That was the most clever thread title I could come up with...but I think it fits. I love horns. I love their size, their presence, the dynamics, and even their patience testing fussiness.

So, this thread will document some of my bad ideas, over-engineered executions, rambling thoughts. The whole lot of my insanity.

First things first, I am a lucky man. My wife is accommodating and understanding, and even supportive of my endeavors of mathematical expansion formulae.* I have a very large living room, and it's going to get a bit bigger when I knock out a wall and add on to the house. The wife gets a 'quiet' spot to read and relax, and I get room to build ~8-9' long mid-bass horns (more on this later).** I will even get to build a ~1200sq/ft studio to build, test and enjoy my creations in the next few years.

For now, I'm focusing on the long game, planning and piecing together, one piece at a time.***

The real driving force behind this is my drive to experiment, measure, test, listen, build, build, build and build.


Amplifier thoughts:
I've used a 'Chubby' Clementine, 6L6 ~6w tube amplifier for the MF/HF as well, but I wasn't totally satisfied with the sound, so I stashed the good parts from that build and am building a 4P1L PSE amplifier of Ale Moglia's design, driven by 6E5Ps. I have just about everything I need for this build, waiting to buy a pair of Monolith S9's, then I'll have it all ready to make the chassis' for and build.

Ultimately I would like to build a GM-70 or similar amp for the LF/mid-bass, I've actually been slowly buying some iron that would work for such an amp. No solid plans yet, I'll do more thinking on this down the road.

Source thoughts:
I like the B1 clone, but I know I can do better. I think my wife is buying me a pair of Slagle autoformers for our anniversary this year, so I'm going to build a nice box for them and a source selection switch.

I've been working on another Ale Moglia design, his 01A line amp. I'm building a new audio rack, and moving the rack a bit further away from the system, so I'll need something to drive long interconnects. I'll likely put the avc in front of that, and put the amps between the horns.

EAR 834p clone, almost done testing that one, just need to wrap that up and build some nice chassis for it. Very excited about that.

Lenco L75. I've heard a few of these now and really like them. Fairly certain I'll end up buying a project L75 some night after a few too many glasses of whisky and ebay bidding madness. I love my SL-Q3, but the L75s I've heard are quite something.

Horns:
Too many thoughts to type here, but I'll try to ramble in some discernible direction...

I would like to build some Yuichi 290fl's. I have a nice workshop, plenty of tools, and hopefully ample skill to do so, so why not?!

I have a good friend is who is a professional wood turner, and very, very talented. He and I have discussed modifying one of his lathes to turn large horns, so I may commission him to build some round horns at some point. All future prognostication at this point of course...

I built some Inlow mid-bass horns, 135hz, with B&C 8PE21s a few years ago, they are so damn good they were allowed in my living room in very much 'prototype' finish. I'm considering building another pair this winter, and actually make them look nicer than the previous versions. Did I mention how damn good these are?!

So that would make the horns look something like:

** We're knocking out the wall that's behind the horns, and adding on to the house in that direction. This will enable me to build in some ~7-9' long mid-bass horns so that they sit in the current living room ~5-6' and through the divider into the new space by a few feet. Hopefully 2019 or early 2020.


I'll add a few quick pics of the system:

More thoughts and the next stage of adventure soon enough...

You know you just need to be creative -- think a bit outside the box. 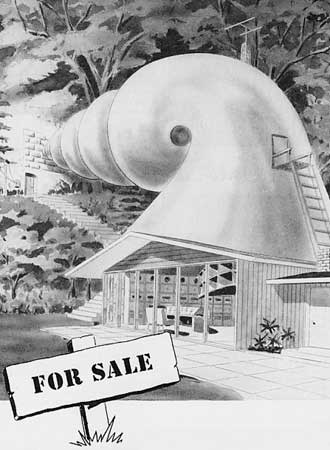 Very, very nice! I look forward to hearing more of your experience with horns and different drivers.

Salectric said:
Very, very nice! I look forward to hearing more of your experience with horns and different drivers.
Click to expand...

Thanks, I'm hoping 2019 will bring me some new drivers and horns to evaluate and enjoy.

Also, I'm actually stashing parts to build your d3a phono pre. Hope to start that build some time this year as well.

Nothing new on the horns as yet, though I am spending a good bit of time in hornresp working out a good hypex mid-bass horn. Once we extend the living room and close in the current patio, I have been given approval by the CEO (my incredibly accommodating wife) to build 'proper' mid-bass horns. Ideally they would cover 40hz-500hz, but after the first few dozen rounds of simulations, I think 50hz-400hz is much more reasonable. I will, hopefully, build a single prototype to test in the garage summer 2019. She gave me permission for a max length of 8-9', though I don't think I'll need to use all of that length

I figure I've got ~2yrs before we close in the patio and extend the living room, so I might as well build a few iterations in less expensive materials to test in the garage before hand.

More immediate plans call for a new audio rack, my current one was thrown together very quickly, and is not appropriate for being in the living room full time, IMO.

I've designed a new rack, with wire channels built in to keep signal and power cabling away from each other, and with a/c filtration built in. The a/c filtration consists of some modules I got from a group buy on DIY Audio forums.

Plan is for streamer/dac and CDP to connect to one, which will connect to it's own outlet. They aren't on separate circuits yet, hopefully that won't be necessary. The rest of the sources will plug into another one, or two. I have 2 built, and 2 more boards on hand.

During planning for the audio rack, it became obvious that I might optimize the layout of gear on the 3 shelves. I also thought I may have enough nice grain mesquite left to make new faceplates for some of the gear....

So I spent an hour in the garage doing some thinking and planning.

I think I got a nice layout for the faceplates and a smart layout of the shelves.

More on this all later, just wanted to capture part of the very long term adventures.....

How is the Mesquite to work with? I live in Mexico now, and I was thinking of making my amp cases, and the outter square box for my build of Belle Bass bins from Mesquite. I have had others in the forums say, no to making the outter square box out of solid wood as it will crack. I also have friends down here that say no it will not crack. I am thinking for the doghouse of the bass bins plywood, but for the rest of the bass bins...Mesquite. What is your opinion on Mesquite?

Mesquite is great to work with, let it dry/season for a long time. Depending on thickness I'll let it sit a year in the shed or shop, or a few weeks in Texas summer heat in my solar kiln.

I would be reticent to build the box from only solid mesquite, though, with some caveats. If you can get enough pieces rift or quarter sawn you may be ok.

Personally I wouldn't do it. I would get 3/4 or 4/4 mesquite and mill it down to 2/4 or 3/4, respectively, and laminate those pieces onto 1/2" or 3/4 baltic birch. Then use those panels for any of the 'exposed' pieces to get the solid wood look, and the 'insurance' of an engineered material.

Mesquite is very dense, and hard, and heavy as all hell, but it's still wood, and will move along the axis of the grain. Make sure your blades and bits are nice and sharp, it will burn if not. I do find it pretty easy to work with, you just need to be prepared for the density of the material.

On a project the size of a pair of Belle bass bins I think it's too risky.

Depending on which part of Mexico you're in, you should have easy access to all the mesquite you could want.

Thanks, we are in San Miguel de Allende which is high desert at about 6k'. We are just getting over our rainy time of year. I had also thought of getting plywood (baltic birch is very hard to get here though), and then getting 1/4" Mesquite glued to the outer shell, and have the doghouse, and inside area stained black. I think I can still do the amp cases for my mono blocks out of wood though as they will only be a maybe 6" or so high.

I think amp cases in solid mesquite would be perfect. I'm just doing the faceplates in mesquite for some of my current builds.

1/4" mesquite glued to plywood is perfect, doesn't have to be BB, any good quality ply would work well.

Definitely post some pics as you progress, I know I would love to see them.

Thanks I will do. I hope to get a jig for Doing finger joints in the future so I can make some nice joints. I think I will start out with just a 45 degree joint, and then use my biscuit cutter to do some cuts in the corners and then get a nice contrasting wood to put in the slots. I originally wanted to make my cabinets from Yucatan Rosewood, but it is on the endangered list, and no longer imported...so I assume it will be expensive to get in Mexico if I can even get it, even though it is a Mexican wood. I will start my own thread for my build projects soon.

Staff member
I do think these are some pretty impressive horns! 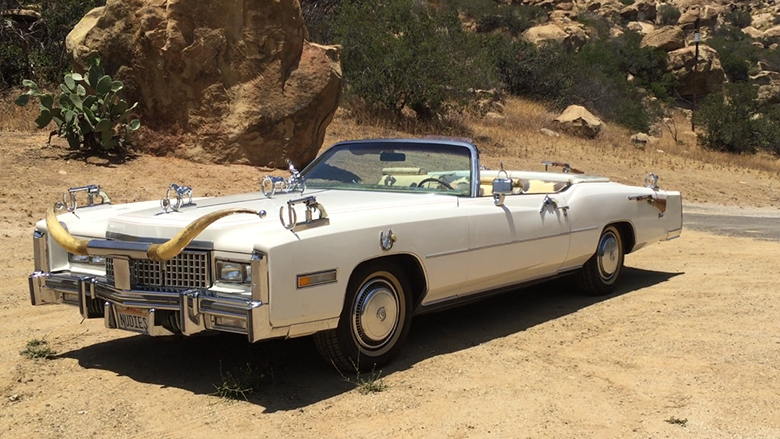 Prime Minister said:
I do think these are some pretty impressive horns!
Click to expand...

In person they are quite large. There's a herd behind my friend's auto shop, so I get to see them up close every now and then.

gable said:
In person they are quite large. There's a herd behind my friend's auto shop, so I get to see them up close every now and then.

Not too close, I hope. I'd think getting one of those guys mad at you would be a pretty bad thing.

They would try be mad if they saw you pull in a Caddy with their friends horns on it!

the epitome of good taste in subtle automotive customization; thanks for sharing that.

Prime Minister said:
Not too close, I hope. I'd think getting one of those guys mad at you would be a pretty bad thing.
Click to expand...

Haha definitely
You must log in or register to reply here.

P
Hello from the Czech Republic
2