good report on counter-intuitive result. we just never KNOW, til we listen to something, how its going to perform in the real world.

Just saw this thread AR. Wonderful story and a great example of what some of this gear can mean to people.

Currently my Swifts are in the master connected to a Pioneer SX1000Ta receiver which is older than your Pioneer. That little old receiver has sounded very nice on just about every set of speakers I've thrown at it and the Swifts are no exception. Maybe because it is cap coupled and has that tube like warmer sound that the early receivers tended to have.

Drugolf said:
Currently my Swifts are in the master connected to a Pioneer SX1000Ta receiver which is older than your Pioneer. That little old receiver has sounded very nice on just about every set of speakers I've thrown at it and the Swifts are no exception. Maybe because it is cap coupled and has that tube like warmer sound that the early receivers tended to have.
Click to expand...

"cap coupled" is something i was not aware of til a few years ago. i was finding that some very inexpensive gear was sounding better to me than higher-rated far more expensive gear. turns out the the ones i was liking are cap coupled. there is an openness, spaciousness to their sound. perhaps an ease. not sure if cap coupling is the direct and only cause of that sound, but i was finding a high correlation.

I've been listening to this pretty much full-time for the last coupla months. 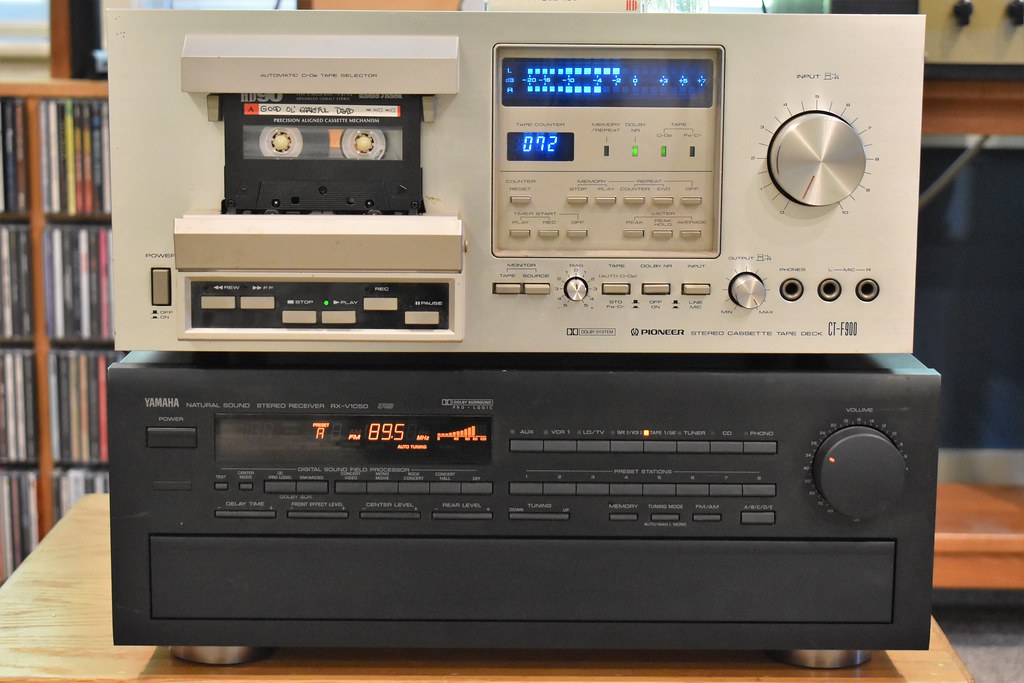 It gets worse...
I've been listening to it.
On.
The.
Santiagos.

(legacy photo of one of the above-mentioned pair of Santiago(e?)s in situ -- in another time's forgotten space)

Nice! Love Yamaha! Here is Yamaha's TOTL receiver from around 92.

Since you persuaded your Yamaha to drop her drawers (so to speak), you encouraged me to snap another photo of mine, doin' her stuff.

They must be more or less contemporaries, eh?

Pretty darn close. Though mine has a remote controllable input selector knob. Apparently it led to issues, but cool nonetheless, and mine still works.

I prefer the styling of the prior series receivers, like the RX-530 and RX-730. I have a 530 that sounds incredible, almost like it is still in "like new" condition, though it is about 35 years old. Plus Yammie offered some "cool metallic plastic colors" for that series.

On my radar is the series prior to the X30 series, the X00U series from the mid 80s like Joe the Pop's RX-700U (also had 900 and the 1100 was totl if memory serves). I almost pulled the trigger a few times on a model or two from that series. Love the Yamaha sound (seems consistent bw models and decades), and especially the looks of these mid/late 80s models. Maybe I will dig up the 530 and 730 so they can show off how sexy they are (to me at least).

Okay, just stop it. All of you. I used to lust after that stuff when I was a bit younger... I'm having unfamiliar stirrings in my lions.

Either of these do it for you?

@Drugolf Love that thing! Yeah... my garage system doesn't have the dimension of the house system, but I love it nonetheless. It's just 70's oomph. Good solid bass and mids. It's the way I grew up listening to music. Pink Floyd, for instance is just glorious on the system. The speakers are a bit beat and need to be re-wrapped and a couple of cones are pushed in. It'd be an ugly house system, but it still sounds fantastic. My SX-780 use to have a pair of Cerwin Vega U-321 HEDs hooked up, but they're long gone. I found a pair of HPM-60s, so that's what's hooked up now. I still troll craigslist hoping to find another pair of the Cerwin Vega's. I know they suck from an audiophile standpoint, but that's not the point for the garage. One of these days I'll find another pair.

Man, a bunch of you guys have some really nice old gear. Really happy to see you posting it! Very much fun!

Drugolf said:
Either of these do it for you?
Click to expand...

Audio Refugee said:
Too Long; Didn't Read: Dood resurrected a should be dead Pioneer SX and likes it better than his Primaluna... Moron.

Well damn. What a conundrum. I have an old amp that means so much to me from a sentimental perspective. It's a Pioneer SX-780 and belonged to someone very special to me. He passed away in '84 and it was given to me. I used it till it died, had it fixed, and then it died again. The last time it died was maybe 5 years ago. Fast forward to todayish. Pretty satisfied with my current system. It's a Primaluna Classic with an assortment of tubes, a pair of Nordost Frey speaker cables - on a semi permanent loan, Meadowlark Swift speakers with NOS tweeters and drivers. That's the main stuff. I have a Rega turntable, Pirimare phono preamp, and a rudimentary CD/DAC solution. I'm in love with "The Idea" of my system. I love the glow of the tubes. I love the warmth of the sound (I thinnk I do, or maybe I thought I did). I love the way the Uber High End cables gave me so much more detail from my Swifts (Was it that, or was that I finally broke in the NOS drivers and tweeters... I dunno). Best of all... got the wife on board!!!!!!!!!!!!! Did I mention I got the wife on board. Holy crap, I got the wife on board. She LOVES the system, the nostalgic glow, the warm sound, the atheistic... Life is Good. I'm no longer... an Audio Refugee. Music is back in the house.

I have some new audio goals that will require a shit ton of money (for me... relatively speaking), so I've been holding off on DAC, CD transport, streamer, moving coil and SUT upgrades. It's been killin' me but I've been pretty disciplined about it. But I kept looking at the dead Pioneer SX-780 perched on a shelf.

Couldn't take it anymore, so I pulled it down, dusted it off, plugged it in hoping that maybe the universe might have healed this one of my most beloved... things. It's not my friend/mentor/brother, Glenn Klimek, but it's a reminder. It's a thing he shared with us. He blasted that thing so that we could enjoy it. He didn't make it off limits or set volume limits, so... I should apologize to all the neighbors. 45 Watts? I don't buy it, but whatever. We played it LOUD all the time. Glenn had 'em hooked to a pair of Cerwin Vega HED 10 or 12s. I can't remember. More on that later. He was one of three original founders of DYSAN Disc, Corp., driver of an SCCA C Production Datsun Z with an L28, and I was lucky enough to be one of two on his Pit Crew. We raced across the U.S. the summers of '81 and '82, raced against Paul Newman twice, and qualified for the SCCA National Runoffs at Road Atlanta... from THREE different divisions in '82.

So Glenn Passed and I got his amp. It got older... and older. I kept it, but when it died the second time... that's what I did... I kept it. Built a new system, went a new direction (tubes) and have been happy. Hard to sit still though. So even though I've been disciplined about spending... I had to get it the Glenn amp fixed after taking it off that garage shelf. I took it back down to the guys that fixed it the last time and they took another crack at it.

They finished it. Upon hearing the words... I felt... anticipation, nostalgic, cautious, but most of all... a flood of memories washed across my brain. I just wanted to hear it again. When I picked it up, Norman plugged it in and gave me a pair of headphones to hear it. Good. It lit up in all it's glory. He asked if there was anything else I needed. I thought for a second and said "We use to have this hooked up to a pair of Cerwin Vega HED's, and we rocked the world with those. Got any?" Norman replied "Those are DJ Disco speakers with lots of bass, but not a lot of anything else." I was insulted! It was like someone had just insinuated John Wayne was weak. "The HELL you say!" I didn't say it though. I like and trust Norman. Instead I asked him "What would you suggest for this amp?" He responded "Pioneer HPM-100. Same designer as the JBL Century 100. Get either of those or some klipsch Heresies.

I didn't know anything about any of those three speakers except the Heresy. I thanked Norman, grabbed my beloved amp and headed home. I put the amp in a safe place, where I could see it, and stared at it for the next several days. What was I going to do with it now that it was... fixed? Doesn't take 4mm banana plugs for speaker inputs... takes wires. How cave man. Has ONE Aux input! Really? A built in Phono Preamp, but the only way to bypass it is to use the Aux input... but now... how to do you input your DAC and it's digital sources. And, how the hell am I suppose to address the the speaker cabling issue? My expensive cables won't work. The connectors are too damned big. Problems, problems and more problems.

Didn't care. Wanted to hear it. Knew I had some thin cables that I use to use to run rears many moon ago. Those would work, but I was pretty sure they'd sound like crap. Found 'em. Cut 'em, stripped 'em and wired these cheap cables to my Meadowlark Swifts. Move the Phone Preamp interconnects from my Primaluna to the Pioneer... and fired that mess up... Wow!

Then moved the DAC cables to the Aux inputs on the Pioneer. OMG! I listened all day. Maybe I'm a Luddite. I'm in love with the idea of tubes. But, this sounds SO much better to me... with CRAP cables! I'm hearing so much more bass punch, more highs, more mids, more separation, more immediacy.

So, I'm asking myself... Am I liking it better out of nostalgia? I don't think so. Is it because the music I like was pressed during the SS Renascence? I don't know. Is it really better than the music coming out of my Primaluna Classic? I think... yes. I like it better.

Thanks for sharing this.
A wonderful tribute to an enduring friendship - enhanced with great hi-fi memories and superb, classic sound. Love it!
You must log in or register to reply here.

Faith and begorrah! a "can you please ID this tube amp?" post - from me!?

Can we discuss high(er) end TT's with auto return etc??
2

Does this make me a hoarder?

Show me your lamps!
2

Are the Queens awards a Joke ?